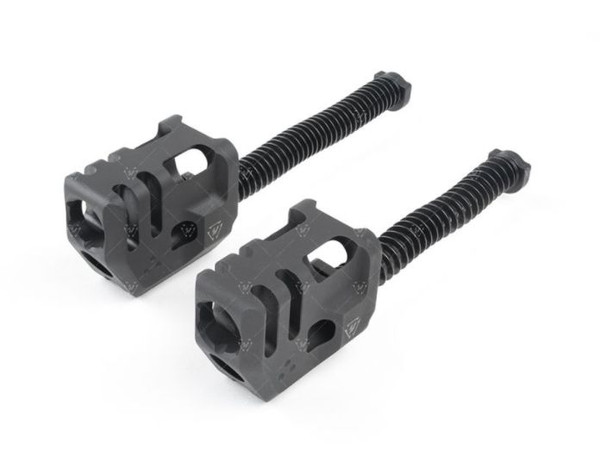 The Strike Industries Mass Driver Compensator (MDC) represents a quantum leap in compensator design. Current designs have largely been unchanged since the 1930s. It’s about time for something revolutionary. The Mass Driver name is inspired by the idea of theoretical mass driver engines in space travel. By ejecting mass, an equal and opposite reaction is generated propelling the space vehicle forward. The Mass Driver Compensator is driven by the hot gasses expelled through the barrel after the round is discharged, and acts as a counter balance system to attenuate mechanical recoil. Barrel mounted compensators add reciprocating mass and increase the moment of inertia to the operating system, which can have a negative effect on reliable cycling of recoil operated handguns. By separating the compensator from the operating components after ignition, the MDC allows for close to stock cyclic speeds, and reduces reciprocating mass. The compensator of the MDC system has a widened bore to reduce baffle strikes and keyholing rounds along with a 2.5mm relief cut at the top of the rear to reduce “lipping” and damage to the face of the pistol slide.

Threaded Barrels: Yes, the Mass Driver Comp is compatible with most GLOCK™ aftermarket threaded barrels. We've tested with majority of the popular brands on the market but not all. However we recommend use with non-threaded barrels if possible.

-Holsters: SI Mass Driver Comp sits flush with OEM GLOCK™ slides and can be used in most open-ended holsters that accommodate compensators

NOTE:
-Recommended torque value for guide rod nut is 25 lbs/in.
-Use with +P and +P+ 9mm ammo will produce premature internal spring wear and cause failure